A downloadable game for Windows

A NEW VERSION OF CARDS GAME WITH THE CHARACTERS OF "HAPPY DAYS" (TV  SERIE): 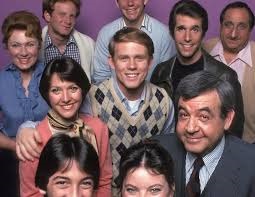 "Mariaccia" is an italian cards game between two players: human vs computer.

The name "mariaccia" comes from the word "marriage": a virtual marriage between the king and the queen.

The rules are similars to the "briscola", very popular in Italy. There are 4 suits:

denari (="golden tokens"), spade (="swords"), coppe (="cups"), bastoni (="sticks"): one of these is called "briscola"; if you play "briscola" you 'take' all the other cards; for example 'bastoni' is briscola: then  you can play bastoni to take the other card. Initially there is no briscola; subsequently it is established by the "marriage" rule (see below). The dialer deals 5 cards to each player, leaving a deck of 30 cards; the human player is the first to play: select a card using the buttons 'A', 'B', 'C', 'D', 'E'; then pc play this card. Then you take an other card to the deck: in the last 5 game hands there are the followings rules: you must play the same suit of the first card; if  you have none you MUST play a briscola (using the "marriage" declaration also); otherwise you can choose the card you want.

The card values are the followings:

The  "MARRIAGE" is an important rule: if you have two cards, 9 and 10 of the same suit (for example 9 and 10 of cups) you can declare it pressing  both buttons (corresponding to the two cards): in this way 'cups' becomes 'briscola'. The value of marriage is 20 pts.

The  winner is the player with a score of 301 points.

In order to download this game you must purchase it at or above the minimum price of 4.00€ EUR. You will get access to the following files: 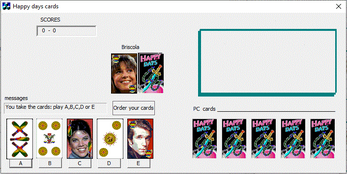 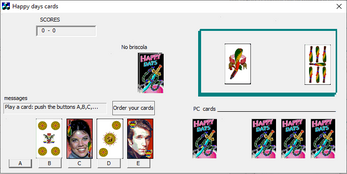 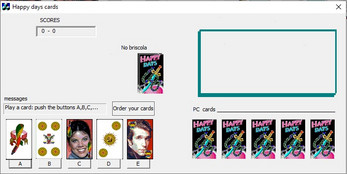